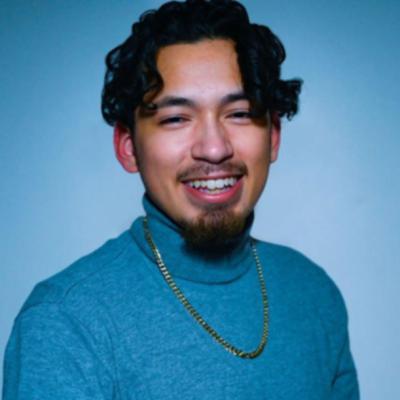 Nixson Benitez has wasted no time in leaving his mark at UNI – using the power of journalism to elevate underrepresented voices.

As the first Latino executive editor for the Northern Iowan campus newspaper, Benitez started a Spanish-language column for the publication. He also helped create the Iowa Association of Black Journalists, was inducted into the Iowa Latino Hall of Fame and also received a Newman Civic Fellowship award.

“Benitez is an outstanding student and community leader,” Nook said. “He truly reflects the spirit of this award as demonstrated through his leadership and service as a student at the University of Northern Iowa and throughout the state of Iowa.”

As a first-generation college student whose parents immigrated from El Salvador, Benitez said he grew up not giving much thought to college. His journey to UNI started when he visited campus on a Diversity Day trip while attending Lincoln High School in Des Moines. He left the trip determined to enroll.

“I already felt like I had a lot of connections,” Benitez said. “It felt like home. When I made my decision, it made me so happy to say ‘UNI’.”

At UNI, Benitez was initially interested in pursuing theater but switched to journalism. Various class assignments solidified this decision, including one from cornerstone instructor Debra Young that opened his eyes to the lack of diversity in journalism.

“I think it's super important to highlight the voices of people that look like me,” Benitez explained. “Being in the journalism field means working for the people, giving back to the people and giving power to the people. That is something I'm really passionate about.”

Benitez’s hands-on journalism experience at the NI came from an unusual place when he approached the organization’s advisor, Chris Martin, with ideas on how the paper could improve its coverage of the Latinx community on campus. He pitched the idea of a Spanish-language column to Martin, and a new staple feature of the student newspaper was born.

“The column was important because I wanted to see myself and others being welcomed in their native tongue,” Benitez said. “UNI is a pioneer in this area, showing how much value there is in not only translating from English to Spanish but also writing in Spanish.”

“I’m very proud of Nixson’s innovative ideas on diversity, equity and inclusion,” Martin said. “He has led the way in making sure all communities at UNI are visible and their voices are heard, which makes the student newspaper even more relevant for our times.”

When thinking about the future, Benitez has big goals including ensuring the permanency of his Spanish column, getting his master’s degree and someday becoming the executive editor of a local or national newspaper.

No matter when he achieves his goals or how they may shift with time, he plans on doing it all with passion.