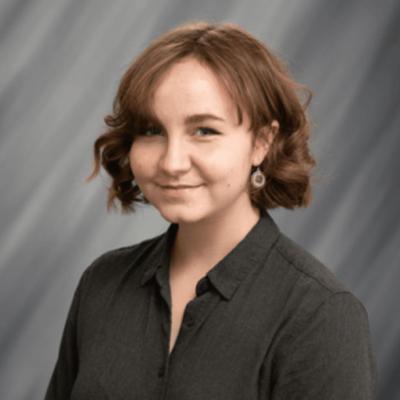 To say that Samantha Bennett made the most of her time at UNI would be an understatement.

During her four years at the university, she put in thousands of hours studying for – and acing – professional-level actuarial science exams, interning for an insurance company, volunteering at a community garden, and serving as President of the Northern Iowa Student Government – all while balancing an active social life.

Bennett says UNI and the actuarial science program helped her develop the skills and experiences needed to excel both personally and professionally, while finding new passions along the way.

“Actuarial science is a notoriously challenging major. When I first started, one of my professors warned me that I’d be spending most of my time in my room studying while my friends were out. But, I still managed to get out and do a few things,” Bennett joked.

Bennett’s deep involvement on campus started when she volunteered with the student garden her freshman year. After that, she became involved in the sustainability committee, eventually working her way up to Sustainability Director for the Northern Iowa Student Government (NISG).

“When she suggested I run, I thought ‘that’s funny,’ but she was serious,” Bennett said. “It was never something I envisioned for myself, but it was a great opportunity to improve the lives of other students on campus, and I couldn’t say no.”

“When I first told my friends and classmates about my campaign, I think they were a little worried if I’d have time for everything, but they were all super supportive,” she said.

Between the long study sessions and rigorous exams, Bennett launched her campaign for NISG President.

“I’d learned a lot of time management and balance skills through actuarial science, and those really paid off,” she said. “While I was running this campaign I was also studying for my last actuarial science exam, and I think it made me study even harder because I had the mentality that failing isn't an option. A lot of people get a six or a seven on this test, but I got nine, which is pretty close to a perfect score.”

Bennett landed the role of NISG President, with public relations major Alisanne Struck serving as her Vice President, and the two immediately got to work.

One of the biggest things Bennett focused on during her term was advocating for mental health resources for student athletes.

“Two of my actuarial science classmates and study partners were student athletes, and if I thought my schedule was rigorous, theirs was even worse,” she said. “They were studying for the same exams as me, completing the same projects as me, but they were also training, and competing and traveling around with long hours on a bus. The level of stress is so high as a student athlete, and I wanted to make sure they had access to mental health resources that fit into their busy schedules.”

Bennett devised a plan to provide focused mental health resources to student athletes, utilizing her mathematical background to analyze a vast array of statistical data in support of her cause.

“Directly and indirectly, my actuarial science background led me to this cause that I became very passionate about, and really fueled my work as President,” she said. “I feel really proud of the work I’ve done, and I think we’ve developed a really solid plan that could help a lot of people.”

Now, as she prepares to graduate, she will present her Honors Thesis over her work on mental health advocacy for student athletes, and will pass the project on to the next NISG administration.

Looking back on her time here at UNI, Bennett says it was the small, supportive campus community that really made a difference for her, and helped her excel.

“Even before I was a committed Panther, I got to experience the personal attention that makes UNI stand out,” she said. “During my visit, Syed Kirmani [an actuarial science professor], sat down with me in his office and spent an hour out of his own time telling me about the program.”

That personal attention didn’t stop there either. Bennett said the close connections with faculty and classmates were invaluable to her.

“I’d say Syed has been a really great mentor, and I owe a lot to him,” she said. “He’s continued to advocate for me as much as he could, helping me build connections on campus, connecting me with opportunities. It meant a lot to me, and really made a difference. Before I even showed up to a career fair, he had already told several companies about me. It’s that personal attention I feel fortunate enough to get, and it’s just one of the many ways UNI and professors go above and beyond to help set people up for success. I’ve also formed such a strong support group with my classmates, and made some of my best friends through the program.”

Bennett said UNI is the type of place that makes it easy to pursue opportunities, and to find new passions.

“As a mid-sized campus, we have more opportunities than a bigger school,” she said. “Maybe quantity-wise there are more at a larger school, but the quality is better here. You’re more likely to have personal connections with professors, classmates and people on campus that lead to amazing opportunities. I probably wouldn’t have been President at Iowa State, or Iowa, but here, I had that opportunity and I’m really grateful for that.”

“Through my time here, I’ve experienced such personal growth, a sharpening of abilities, and I’ve become a way more confident person,” Bennett said. “Freshman year me is unrecognizable, in the best way.

Bennett will graduate in May of 2022, and has already secured a job at Sammons Financial Group in West Des Moines, where she will begin her actuarial career.

When asked what she’s looking forward to, Bennett said she’s ready to relax a little, and enjoy some much-needed downtime.

“I’m ready to take it easy, and focus on doing less for the first time in a long time,” she said. “The desire to help people is still there, so I’m sure I’ll find some time to be involved in community organizations, and of course, I’ll still support UNI as an alumni and donor. I’m really happy with how I’ve left things at UNI – in the achievements I’ve made, relationships I’ve formed, and the friendships I’ve built. It’s those things that make me proud.